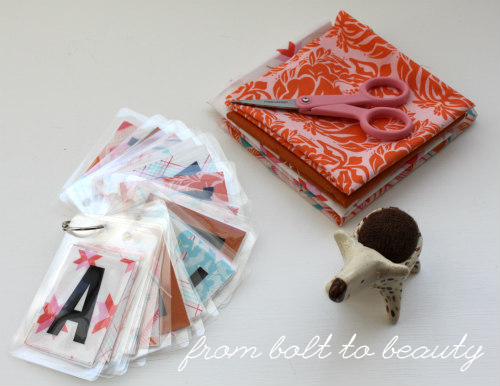 I live in Massachusetts, but I’ve been a member of the New Hampshire Modern Quilt Guild since the year of its inception. There have been times when I’ve served on the guild’s board, as the VP of events or as the president, but I’ve been a regular ol’ member for over two years now. That, however, hasn’t stopped me from helping out in small ways here and there.

A Make-and-Take Craft for Guilds

Most recently, I organized a make-and-take craft for the group. Back in November, we got together and made Leland Ave Studios’ pretty quilt row markers (see a set in the picture, above). It’s a cute and useful craft for quilters. I use a pin to secure my row markers to quilt tops in process, just to keep my head on straight and make sure blocks get sewn in the right spot.

The night was a success! Everyone was asked to prep their fabric strips in advance—although there were extras on hand for those who forgot or those who were visiting the guild that night—and I had assembled a little kit for each maker, with the required laminating pouches, stickers, and O-ring. Those who had laminators were asked to bring them to the meeting, and with five or six stations set up, we all started and finished our projects within an hour.

Admittedly, I prepped more kits than we had attendees that night at guild, so I’ve continued to make row markers for guild mates who missed the November meeting or who want a second set of row markers. With my final 15 laminating pouches, I made a set for one lucky reader (see pictures, below). If you would like a chance to win this set of row markers, leave a comment on this post. (For those who read through apps like Bloglovin’, you must click through to the original post to leave a comment. Thanks!) You’re welcome to say anything you want in that comment, but if you have your own ideas for make-and-take crafts that a guild could do, I am all ears. 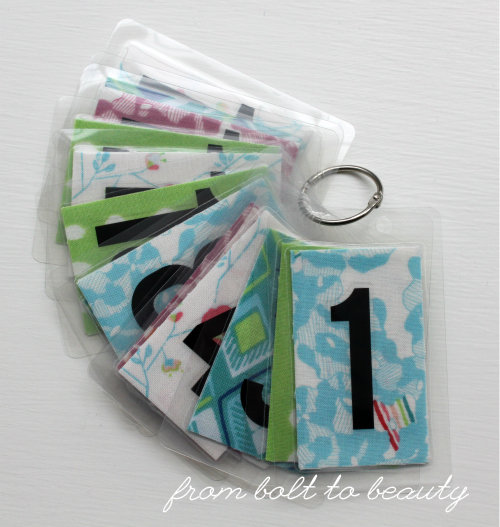 This giveaway is open to everyone everywhere on the planet through midnight on Wednesday, February 26. (I’m on the east coast of the United States: GMT-5). The winner will be chosen randomly, and I will announce his or her name here on the blog on Friday, February 28. I will also follow up via email. If you win, please respond to my email within 72 hours, or I’ll pick a new winner. 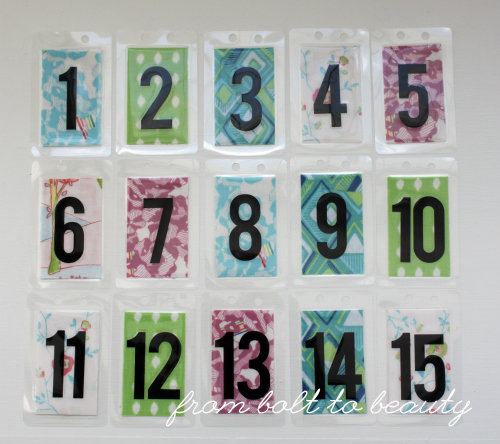 Making Your Own Row Markers

If you want to make your own pretty quilt row markers, below is a list of the supplies I bought on Amazon. The price of the laminating pack can vary over time. As of this writing they’re over $3 per a pack of 20. When I bought some for my guild, they were, like, $1.29. That price discrepancy doesn’t matter when you’re buying a single pack for yourself, but when you’re buying for 40-plus people, the cheaper the laminating pouches, the better. The hardest item to secure—especially at a reasonable cost for a big group of makers—is the stickers. I managed to get several packs on clearance on a different site; they are comparable to the ones listed here from Amazon.
The corresponding tutorial is free and found on the Leland Ave Studios blog. 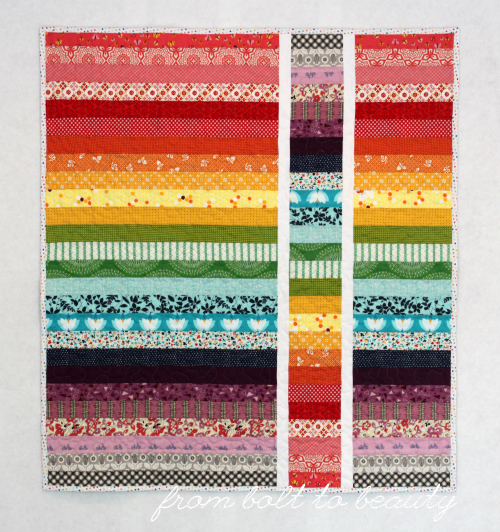 I’ve talked to a lot of free-motion quilters over the past few years, and each one has a unique take on the secret to his or her success. All of them agree on one thing, however: Getting good at free-motion quilting (FMQ) requires practice.

And that’s not something I invest my time in. Every year or two, I decide that I’ve had it with my walking foot and need to get serious about FMQ. I watch videos and read blog posts. I consult my quilting library and practice on quilt sandwiches. Then I do a project and forget about FMQ for another chunk of time. Regular practice—and the muscle memory that comes with it—doesn’t happen.

But I think I might stick with FMQ this time! I stippled an entire baby quilt this past week and am pretty pleased with the results. 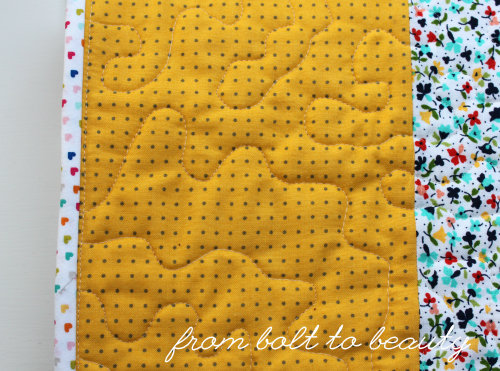 I’ve tried different approaches with FMQ—like marking quilting lines and using stencils—and I tried some new tricks with this quilt. I even cut down a snow carpet for my endeavors, but it caused more problems than it solved for me. What ended up working was (1) not marking anything, (2) starting at the bottom of the quilt and working my way up, and (3) allowing myself as many stops as I needed to readjust the quilt sandwich. I watched an Angela Walters videos on FMQ, and she said, for a successful stipple, quilt in “a lot of different directions: up, down, left, and right.” For whatever reason, thinking of stippling in that way hit home for me, helping me navigate the quilting on this project. 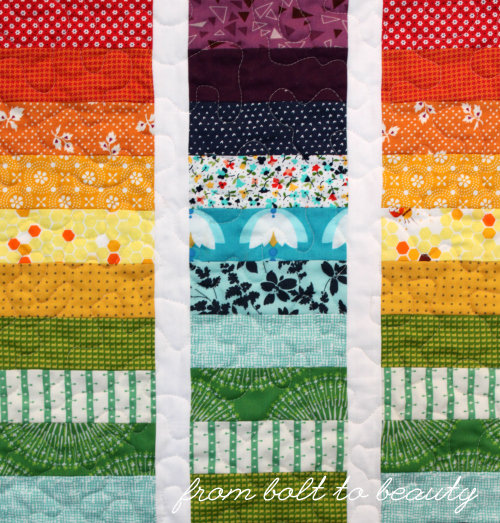 I give my efforts a solid B, which I think is pretty darn good! I managed to achieve a lot of gentle curves with my stipple, and any awkward spots are well concealed by the many prints on both sides of the quilt. My machine is a tension master, so I didn’t experience any eyelashes on the back. I did, however, encounter an occasional skipped stitch, which I couldn’t remedy. (I rethreaded my machine using a new needle and still had issues. Any suggestions?) 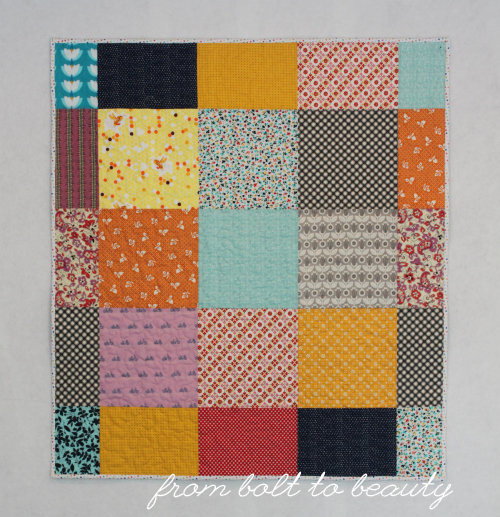 If you follow me on Instagram, you know that some scary stuff happened at my house recently. (If you don’t, everything is fine now; both of my children are accounted for.) I needed a triumph, and this project was exactly that.

Another flimsy is waiting in the wings. It’s a project that would benefit from the curves of an all-over stipple in a larger scale than I used on this baby quilt. I hope to tackle it soon—wish me luck!

I used Cluck Cluck Sew’s strip-and-flip baby quilt tutorial for this project. To learn how to make your own, click here.

To see my past FMQ projects, read: 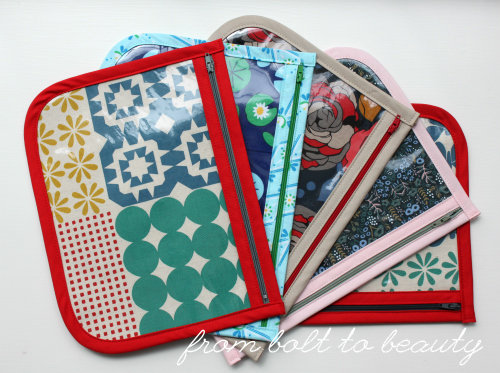 This past week I spent some time doing one of the things I do best: making a bunch of small projects into one big project.

My original plan was to make two zipper pouches for friends who will be attending QuiltCon later this month and fill them with silly items that will remind those friends of our past QuiltCon adventures. I followed the pattern for Aneela Hoey’s See-It-All Pouch, from her Stitched Sewing Organizers. The pattern calls for one 10-inch zipper per pouch, but I had five 10-inch zippers on hand. So, I started up the assembly line—after all, busting one’s stash includes busting one’s zipper hoard.

I cut into some Kokka fabric, designed by Ellen Baker, that has been aging in my stash since 2013 for the first two pouches. Apparently, it can take seven years to find the right project for a fabric. 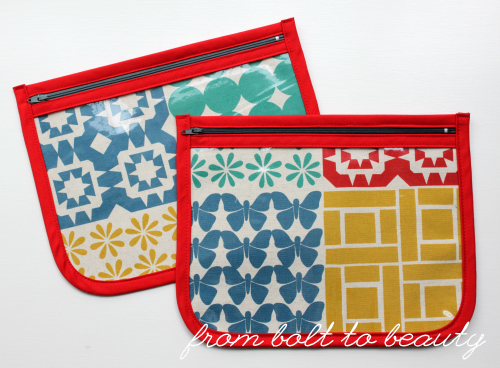 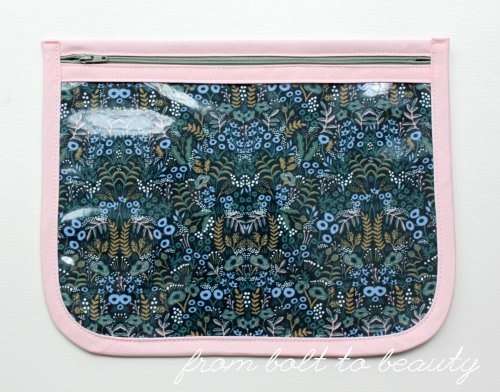 And cut into a mystery fabric (middle, below) and some yardage from Rae Hoekstra’s Lotus line (far right, below—in the stash since 2014!) for the fourth and fifth pouches. 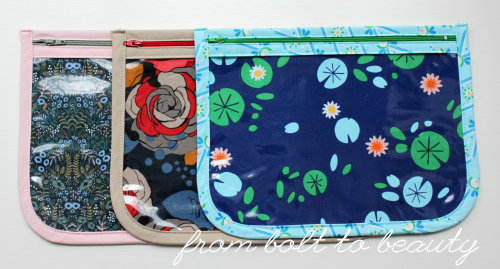 This was my first time sewing with vinyl, and it wasn’t a big deal. I had some issues when finishing the binding on the pouches, though. I attached the binding to the back and finished by machine-sewing the binding from the front, and I couldn’t get the bobbin thread to stay on the binding on the back, especially at the curves. (The straight pieces of binding along the zipper were easy-peasy.) It wasn’t a problem that got better with each pouch, and I had to accept I was doing the best I could. Some sewers would look at the backs and think they are perfect as is. I just like precision with finishing details like that.

You’re welcome to skip this numbered list. There are my notes to my future self for sewing with vinyl in general and sewing this pattern in particular!

1. Iron the vinyl to address any wonkiness when it comes off the roll—just use a lower heat setting with a pressing cloth, and weight the vinyl to cool.

2. Use a bigger needle size (I used a 14 here) and a longer stitch length.

3. Cover vinyl that comes in direct contact with the feed dogs or presser foot with tissue paper. The tissue paper prevents the vinyl from sticking and easily tears away after sewing.

5. Remember that you’re perforating the vinyl when you sew it, so you have only a few times to pick out stitches and resew without undermining the integrity of the vinyl. If you need to resew the final strip of binding, you can always trim away from the perimeter of the pouch so the next set of holes hits at different spots on the vinyl.

Have you sewn with vinyl? I no longer have any 10-inch zippers in my stash, but I had to buy the vinyl for these pouches and have some left over. (How is that for irony? I used up all my zippers of a particular size but now am stuck with leftover vinyl.) I would love to hear any recommendations you have for using that vinyl up! : )

Linking up to TGIFF at Sarah Goer Quilts ...