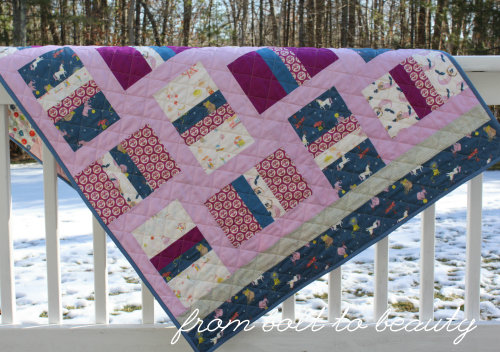 The Show Me Something Purple Linkup, hosted by Sarah Goer, was the kick in the pants I needed to finish my fifth and final version of Camille Roskelley’s Little Man Quilt, from her Simplify book.

Why five versions of the same baby quilt pattern? Because it’s an easy pattern whose yardage requirements are easily met by the fabric I have on hand. The first three versions I sewed were all for little boys (see them here, here, and here). My fourth and fifth quilts are going to sisters: This purple finish is for my 4-year-old niece, and its peach and blue counterpart (see picture below) is going to her little sister, who is scheduled to arrive by this time next week. 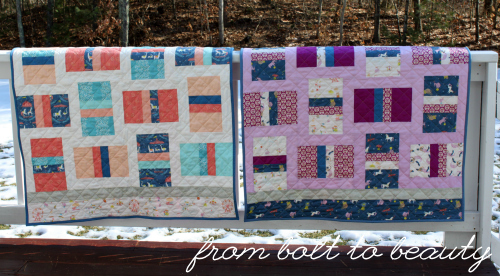 What I like so much about this pair is that they’re completely different quilts made from the same line of fabric, Rae Ritchie’s Seaside Carnival. The only print they have in common is the strip of ocean waves, a fabric by Janet Clare. You can see it at the top of this picture ... 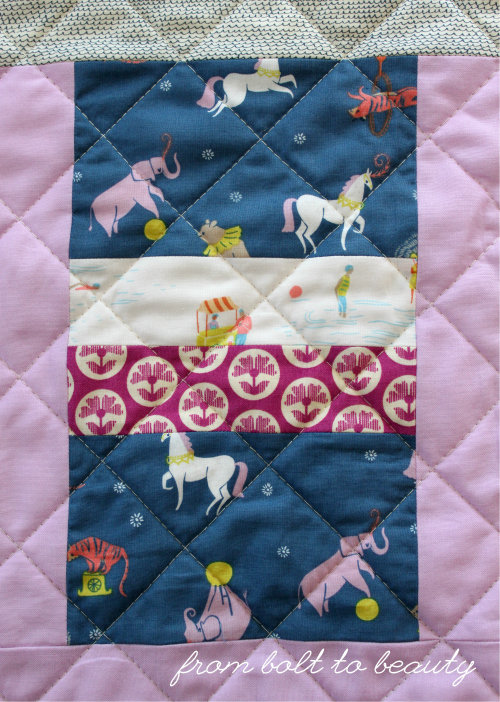 My favorite print from the entire Rae Ritchie collection—beating out even the soft pretzels, featured in my fourth version—has proved to be the mermaids. Dear Stella has released that design in a different colorway, and I’m trying to come up with an excuse to buy some! 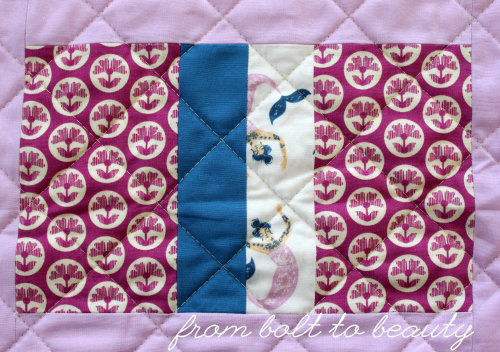 You would think that a fifth go-round with the same pattern would make me an expert, but I made more mistakes with this dang purple quilt than the others combined ... First, when I was quilting it, I realized that there is a discrepancy in dye lots: Two blocks are ever-so-slightly different from the other ones. The disparity is most noticeable in artificial light, and I fear it will become more prominent with each washing. I also had a weird experience squaring up the project after quilting. Until I remedied the situation, the quilt was more parallelogram than rectangle. Sigh. It’s a sign. After five finishes with the same pattern, it’s time to find another go-to baby quilt pattern!

DonnaleeQ was recently expressing a similar gripe to me via email. She said after 30 years of quilting, she still makes the occasional silly mistake. Whereas my pitfalls were dye lots and squaring up, she managed to cut a stack of squares the wrong size. (Been there, done that!) How about you? What amateur mistakes do you find yourself making, even after having sewn dozens if not hundreds of quilts?! Commiserate with the rest of us in the comments below. : )