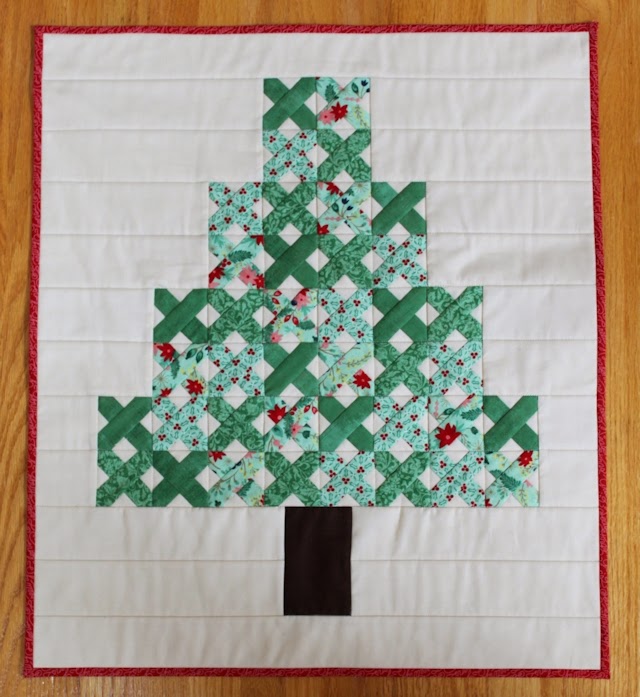 Jump to the tutorial: The Tree Is Trimmed

Cross-stitch blocks have been popping up on blogs over the past few months, and I love, love, love them. The quilt that first got my attention was Mr. Fox, by Samantha, of Making Life Prettier. More recently, I’ve swooned over this blue border of cross-stitch blocks, by Jess, of Quilty Habit.

The Pile O’ Fabric approach looks as if it’s especially good for quilters who want to use a bunch of different fabrics and create a scrappier feel to their collection of cross-stitch blocks. What if I chose to use fewer fabrics (because I wanted to justify buying a new jelly roll instead of breaking into my scraps) and took more of an assembly-line approach to making these blocks (because chasing after two little monkeys seriously cuts into my crafting time)?

With those thoughts in mind, I bought a jelly roll of Basic Grey’s 25th and Pine and came up with a different plan of attack. Right now, I’ve used this method to make a table topper. I also have a wall hanging and a table runner in the works. Even after those two projects are done, I’ll still have enough jelly-roll strips to continue the fun.

For more on how to make your own cross-stitch blocks from jelly rolls, see my tutorial: The Tree Is Trimmed.

If you’re visiting from Le Challenge, this is my submission for the “mix” theme, which I interpreted as “mixed up.” Do you see it? I’ve made a “cross-stitch” table topper, but I made it out of fabric, not embroidery floss! I also have a “quilt” that I’m making out of embroidery floss, not fabric. It’s Little Miss Shabby’s Quilty Stitches project. I suspect it will be ready by October 15 ... of next year. : )

Also linking up to the usual suspects, including Needle and Thread Thursday, TGIFF at Simply Pieced, Finish It Up Friday, Sew Cute Tuesday, Let’s Bee Social, and Fresh Sewing Day at Lily's Quilts ...

Posted by Michelle @ From Bolt to Beauty
Email ThisBlogThis!Share to TwitterShare to FacebookShare to Pinterest
Labels: Basic Grey, Christmas, Moda

From the Archives: Cargo Duffle Sew-Along